Early voting has begun in Miami-Dade & Broward county for the 2018 Midterm Elections but do you know where to go? What about the wait times or even what’s on the ballot?

Check out the list I’ve made for PantherNOW on everything you need to make early voting go smoothly here.

Brett Kavanaugh has been confirmed to the United States Supreme Court with a final vote of 50-48 on Saturday, Oct. 6, following a controversial nomination process which included protests and a weeklong FBI investigation into allegations of sexual assault.

Without Collins, Kavanaugh’s confirmation would not have been possible after Republican Senator Lisa Murkowski of Alaska, a possible swing voter, broke from her party and voted no Friday, stating that her conscious wouldn’t allow her to vote yes.

END_OF_DOCUMENT_TOKEN_TO_BE_REPLACED

In August, Shannen Germain will be moving to North Carolina to start her new job.

That is, if she can enroll for summer classes.

END_OF_DOCUMENT_TOKEN_TO_BE_REPLACED

The two left turn lanes from westbound Southwest Eighth Street to the ramp accessing the southbound Turnpike are temporarily closed for intersection reconstruction, according to a Florida Turnpike representative.

A bid war for FIU’s dining service is underway as the University’s contract with food vendor Aramark is set to expire in June.

END_OF_DOCUMENT_TOKEN_TO_BE_REPLACED

Taking a course in sales and learning how to be persistent are some of the tips Emmy-award-winning journalist Carlos Watson has for students interested in the field.

END_OF_DOCUMENT_TOKEN_TO_BE_REPLACED

I’ve been selected by the Media Board to be Student Media’s new Editor-in-Chief for the 2018-2019 school year.

Read more about my selection and plans here.

Feature Image of me and Harold Lopez, the new General Manager of The Roar, Student Media’s student-run radio station, by Ashley-Anna Aboreden/PantherNOW.

Feature Image retrieved from the email External Relations sent to members of the University community on Tuesday, March 20.

The “Worlds Ahead” pedestrian bridge crossing SW 8th St. and 109th Ave. collapsed five days after it was “swung” into place, leaving tragedy and questions in the wake of a project that had been in the works for almost a decade.

END_OF_DOCUMENT_TOKEN_TO_BE_REPLACED 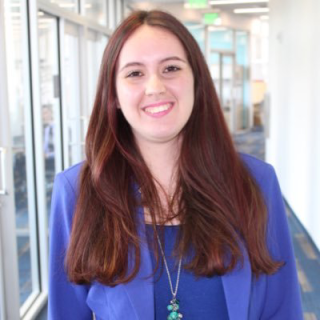 Editor-in-Chief for FIU Student Media's PantherNOW and author of YA novel "Protector." Find me on Twitter @TweetMichelleM or Instagram @michellemarchante